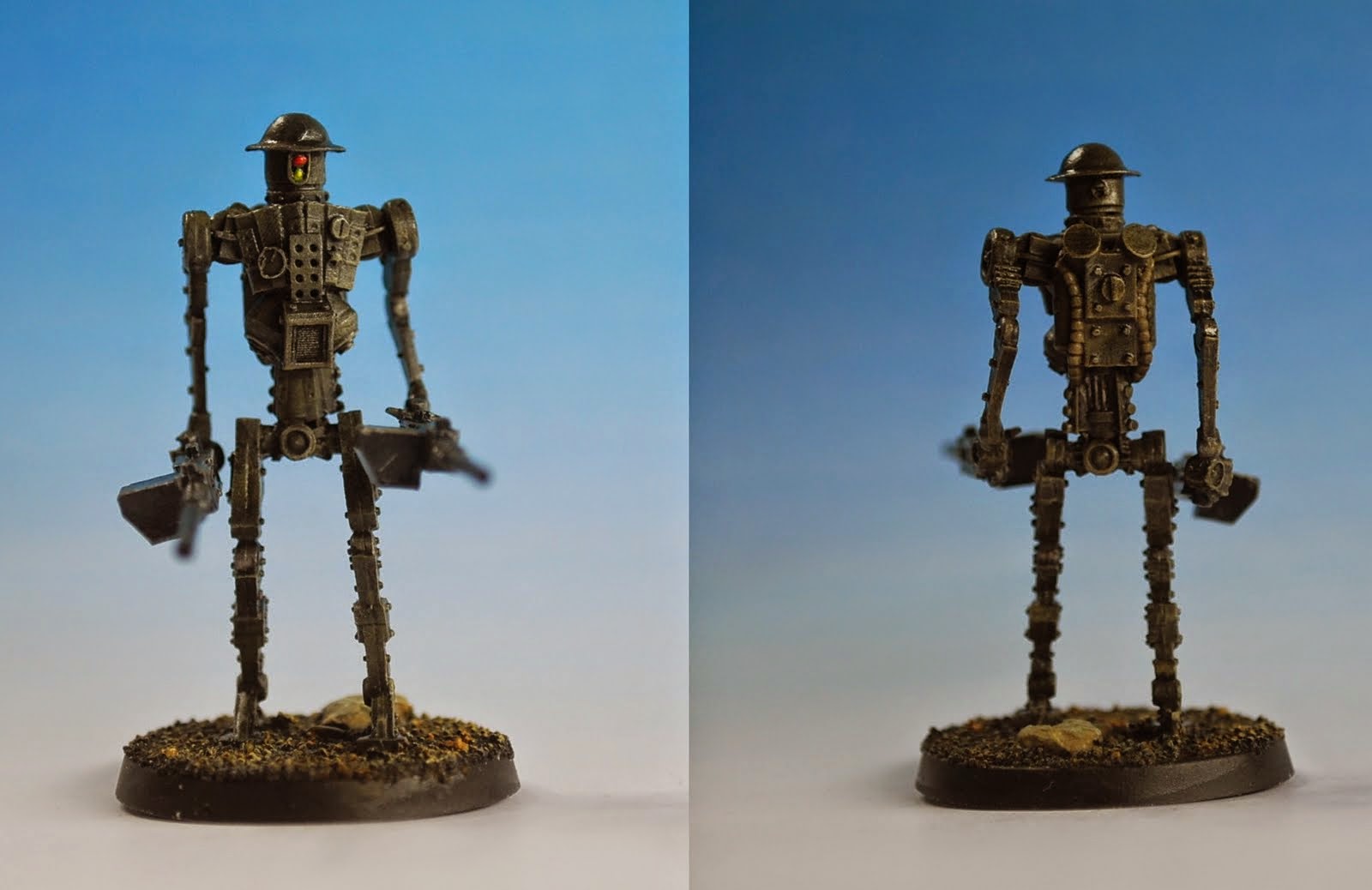 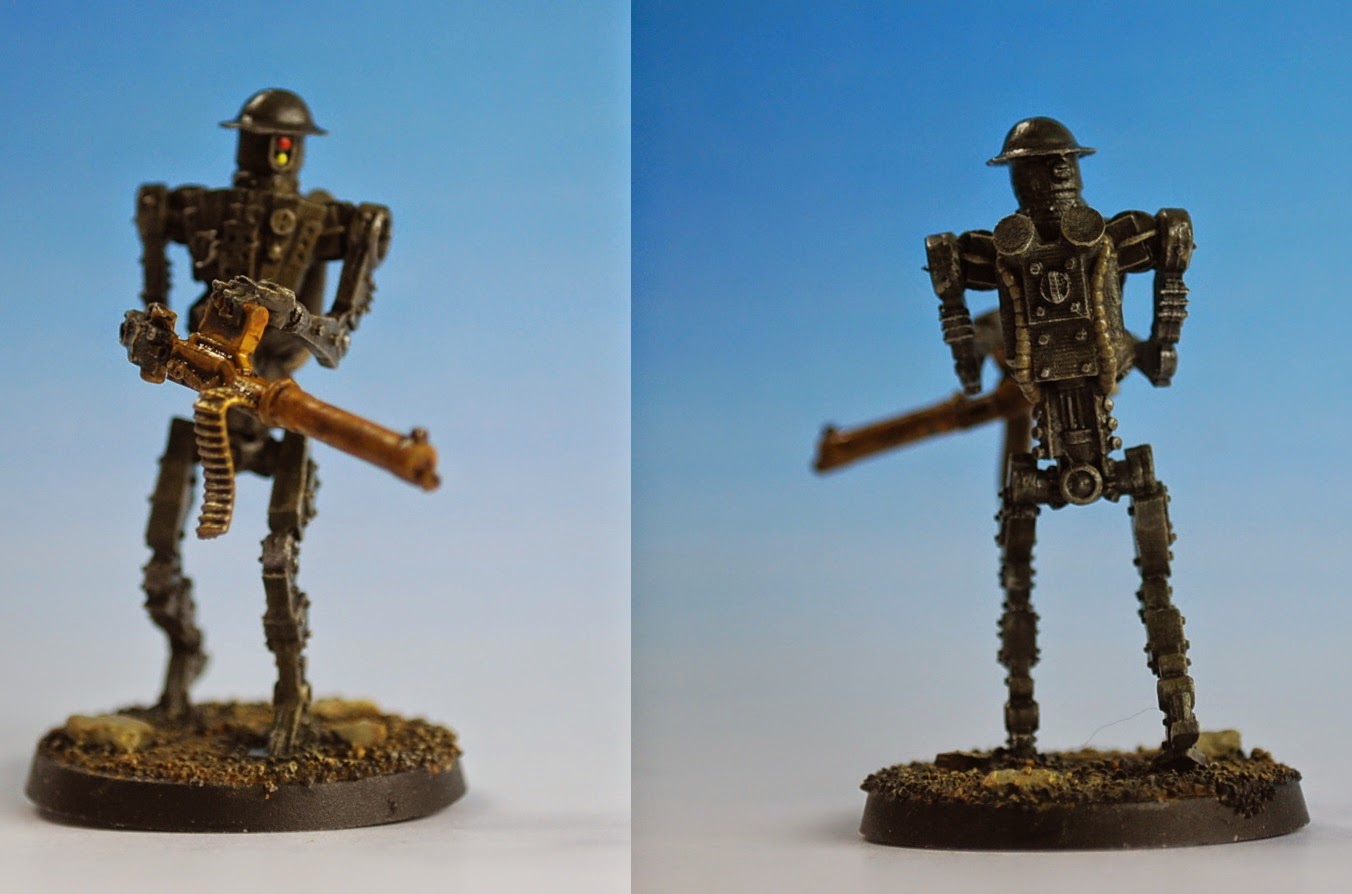 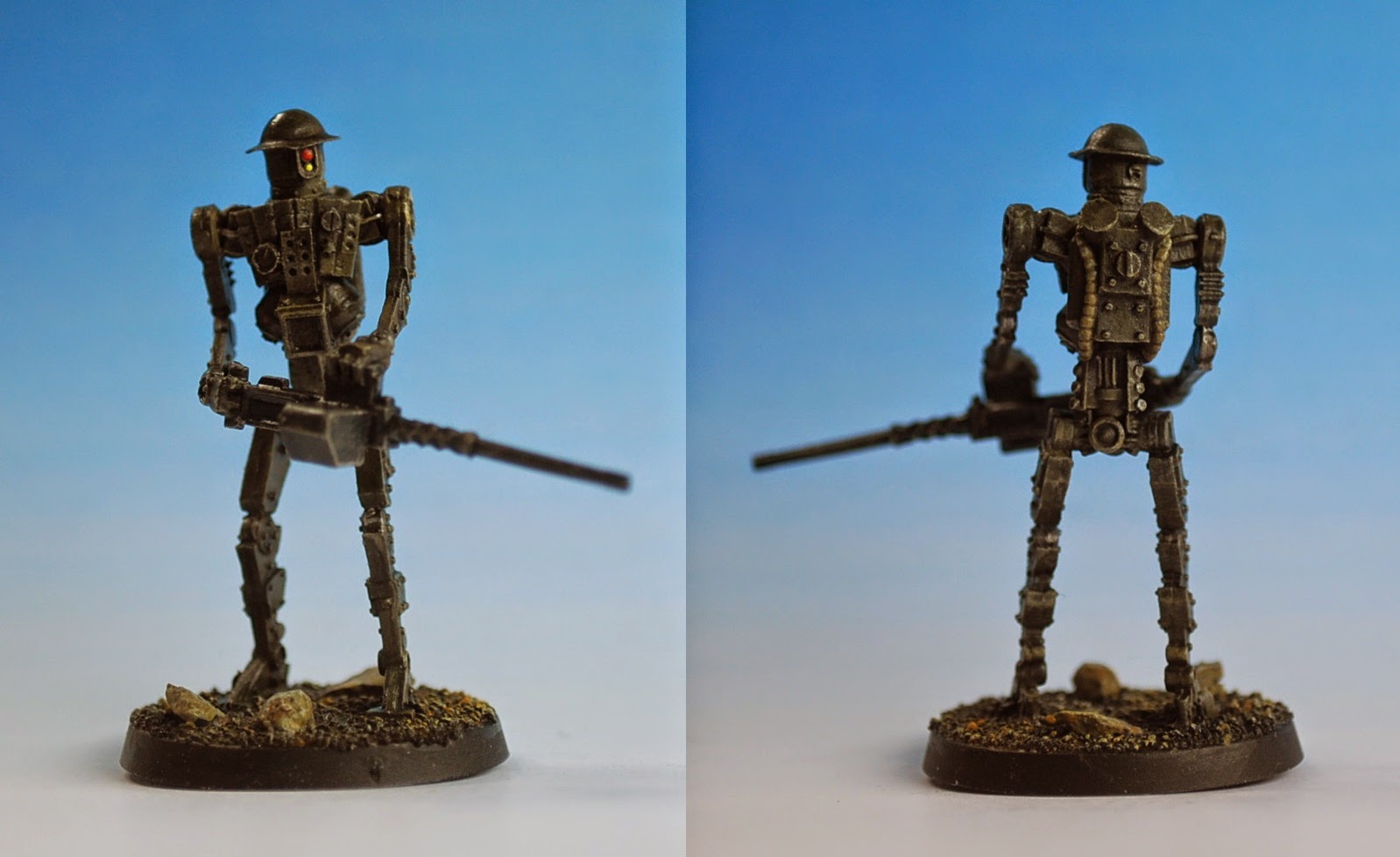 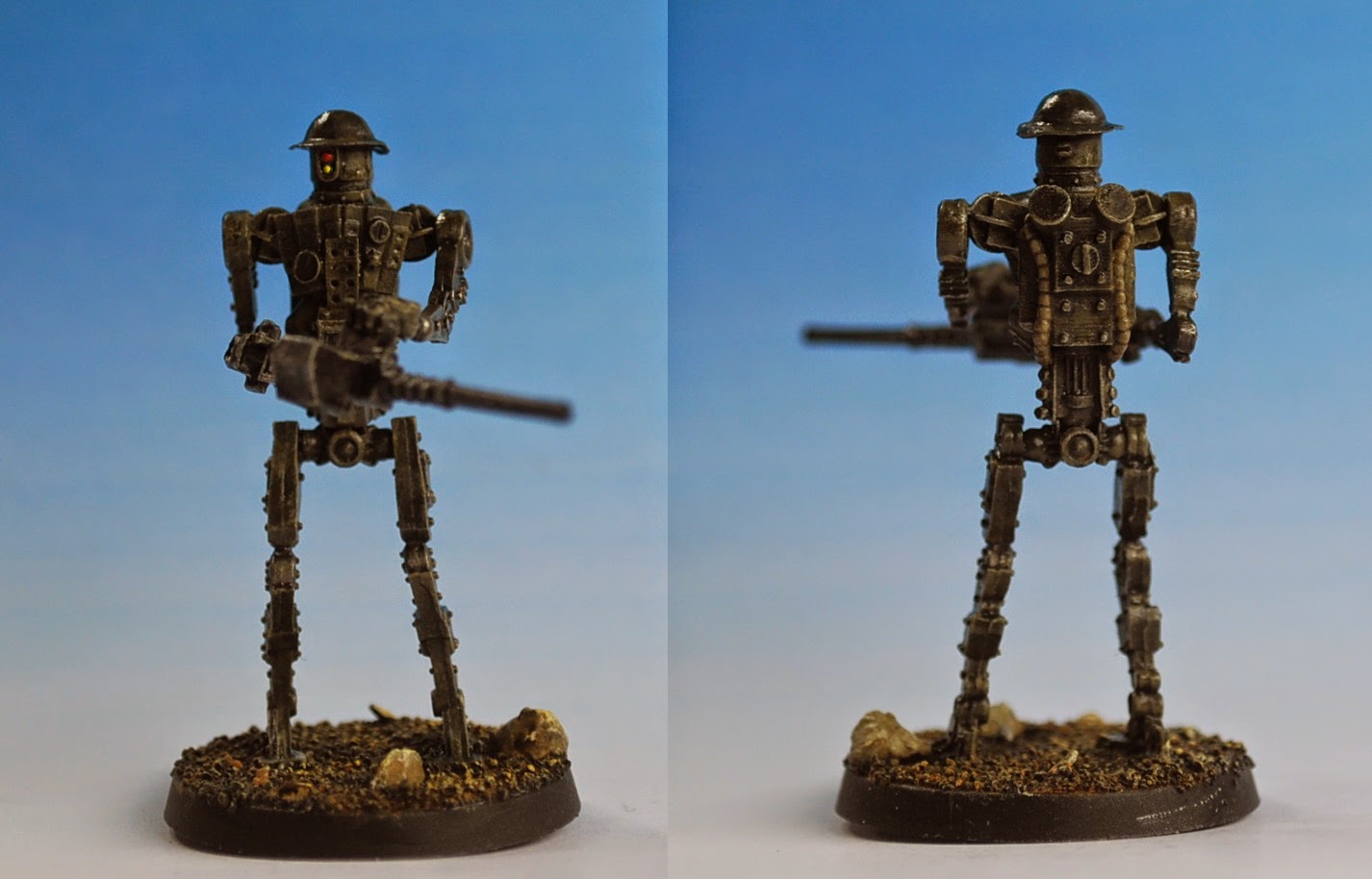 The Vaults of San Gregarious - a Pulp Alley AAR

A few weeks ago a group of us got together and tried out a large multiplayer game of Pulp Alley set in a Rogue Trader/40k inspired setting. There were 5 players with 2 players on one side trying to prevent the other 3 leagues from achieving their goals. The other 3 leagues had individual goals and could work together or not.

The table was set up with the Genestealer cult and allied gang defending the entrance to the temples crypts. The Brain boy led Ork gang and an Inquisitorial retinue entered from adjacent corners while the Imperial Ogryn deserters entered on the opposite table edge.

With 5 players it would be impossible to do a turn by turn account so instead I'll just summarise the actions of each league.

Heisenbork
This band of mercenaries were hired by the local planetary official to rescue his daughter from the clutches of the cult before anything too nasty could happen to her. They took a surprisingly stealthy approach gaining a minor plot point and deciding to use the, eh, rear entrance to the temple, which for some unknown reason was hidden in an outhouse in the middle of the jungle. At this point Heisenbork turned on his allies, ordering Big Billy and Crackers to take out the Imperial Assassin.

Little John's cultists
Allied to, but not entirely trusting of, the hybrids Little John and his gang took up positions in the centre of the table guarding the entrance to the temple's vaults. From these positions they were able to deny the other leagues 2 minor plot points and engage them at long distance. When Little John realised what Heisenbork was up to he sent a strong force into the vaults to guard the governors daughter.


Clash of the Titans
The encounter between the hybrids and Ogryns turned out to be one of the most unusual ones in my (admittedly limited) time playing Pulp Alley. It became a straight up slugfest centred around Beefpounder and the large hybrid. Plenty of others joined in at various stages of the fight, which started in the 2nd round and was still going on in the last round. 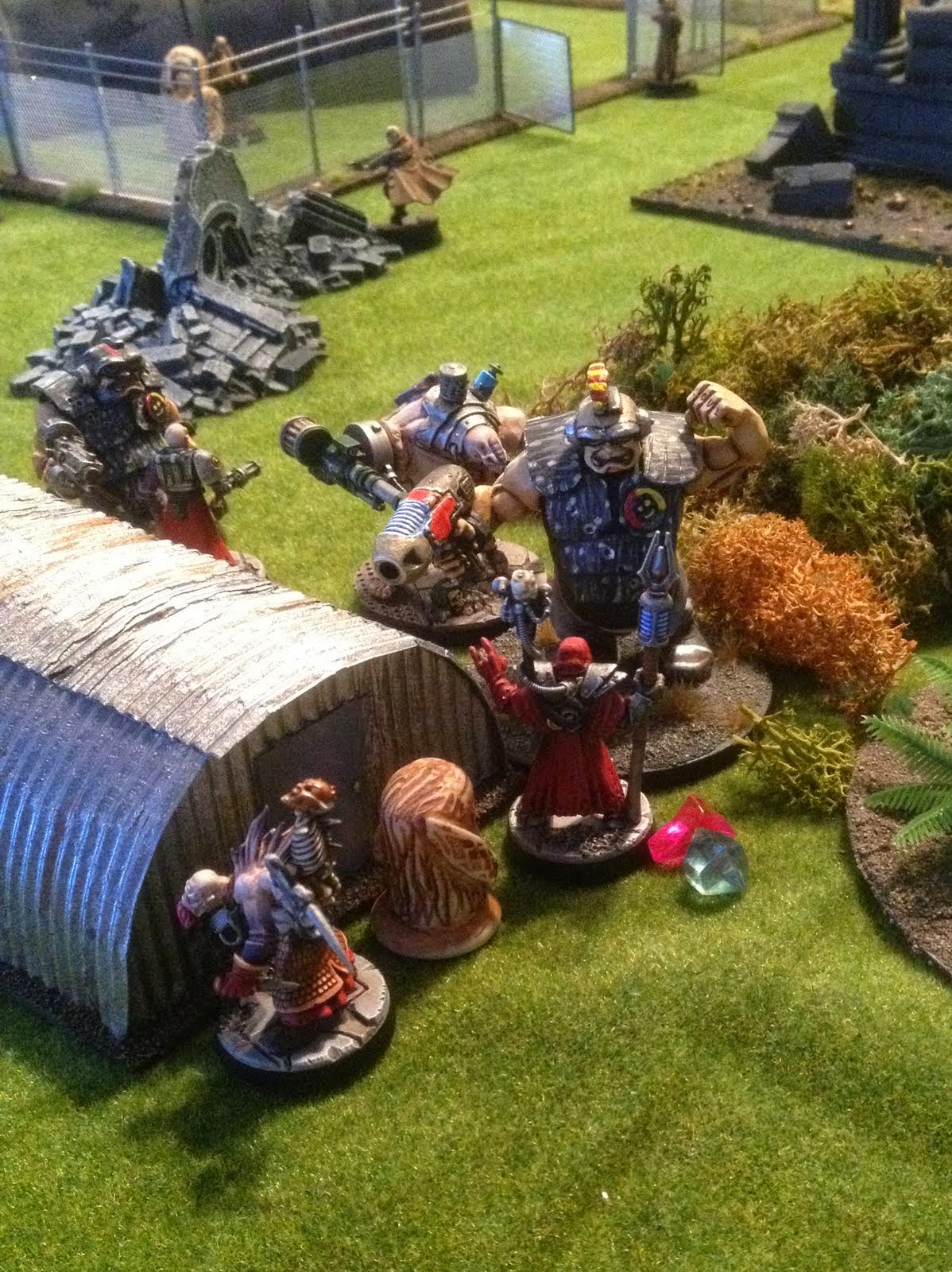 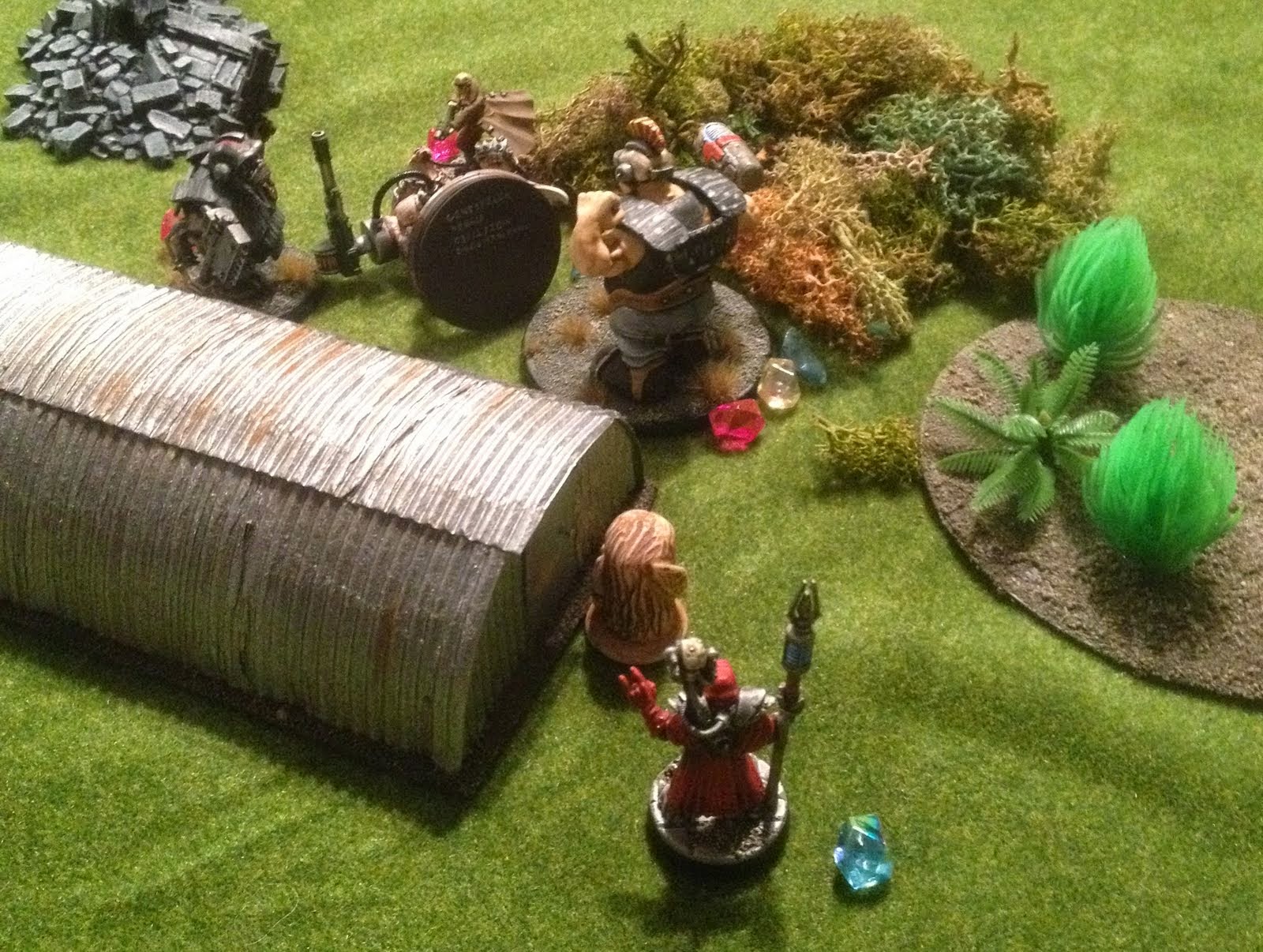 The Inquisitorial Retinue
I've played against these guys before and they are tough with a good mix of long range and close combat abilities. Combined with the skill set of their leader these were sure to be in the mix at the end. Or so I thought. Instead we were treated to a long succession of disastrous rolling. On almost every occasion that they engaged in combat they handed initiative to their opponent. Almost every peril, challenge, health check, and recovery roll were failed which resulted in them dropping like flies. On a plus point Thrawn did manage to gain a minor plot point.


Things were progressing fairly well for Thrawn at this point, a minor plot point had been gained, they were advancing on the temple and had just learned about the secret entrance to the underground vaults. Then the (unwise) alliance with the brain-boy Heisenbork ended as the Assassin was well assassinated.


Things went from bad to worse as two members of the retinue attempted to scale the (not very) lofty heights of the temple plinth. Both failed their challenges (it had been designated a perilous area), both failed their health check and both failed their recovery rolls. At this point there was nothing for Thrawn to do other than go home.


By the beginning of round 5 it had come down to whether Little John's cultists could prevent Heisenbork's mercenaries from rescuing the governors daughter. While the fighting continued above ground forces began rushing into the narrow corridors. 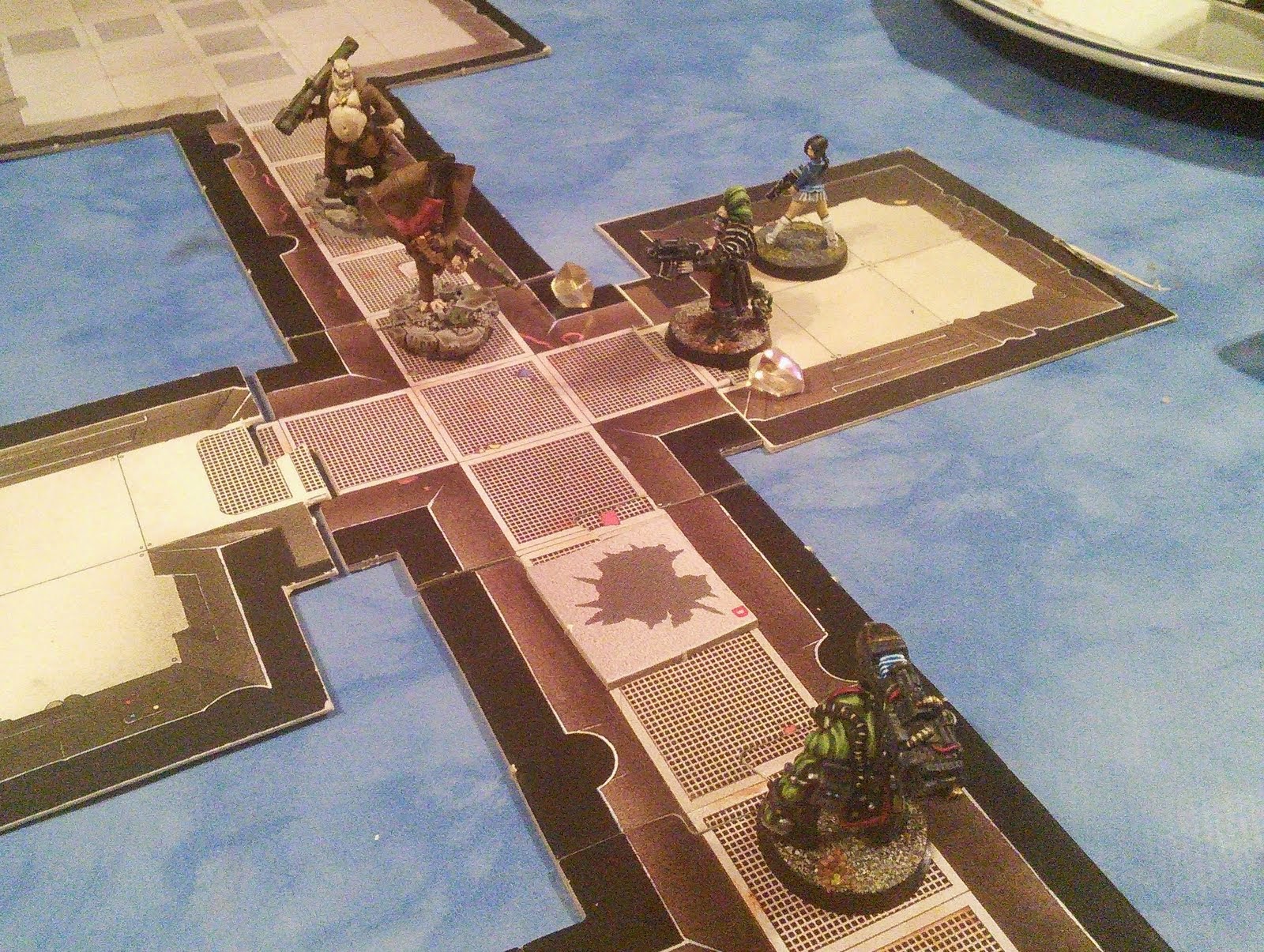 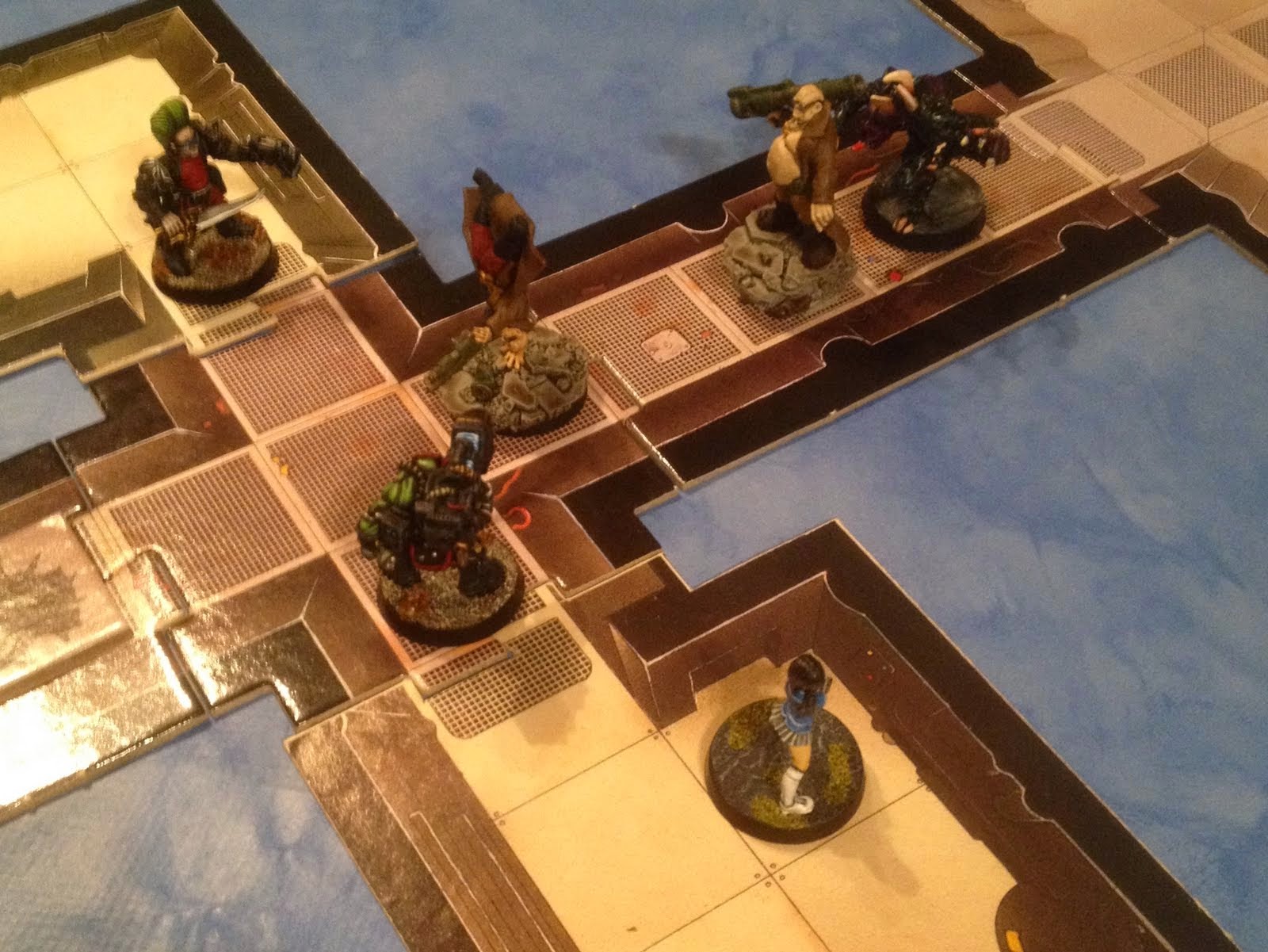 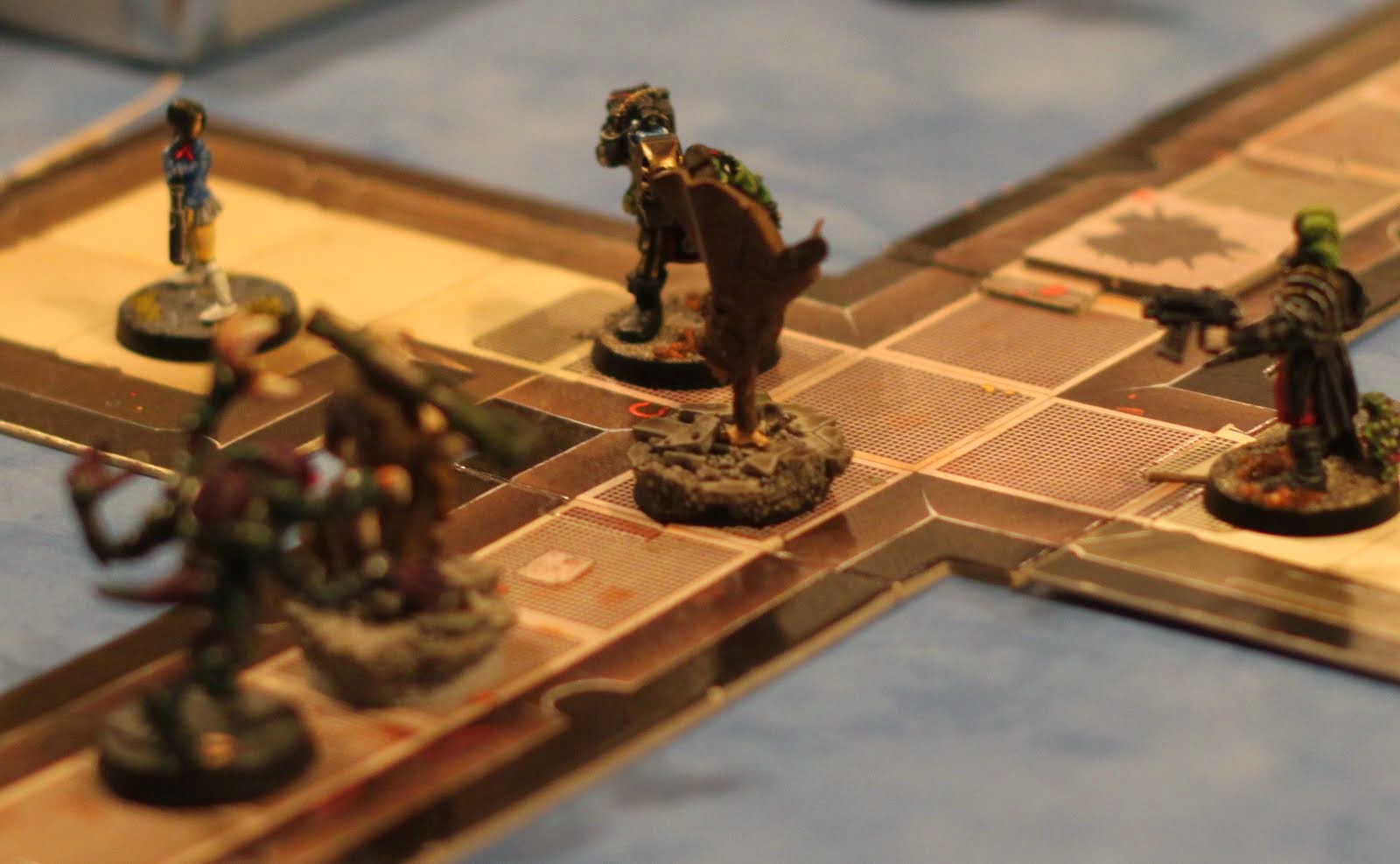 In the end despite almost rescuing the governors daughter Heisenbork just falls short. The game ended in either a tie or a victory for Little John depending on who you asked afterwards.

Thinking about it afterwards five players was a bit much and it did slow the game down a lot. However that was probably more to do with  it being one player 1st game and anothers 2nd as well as the usual chatting that goes on when a bunch of gamers get together for the first time in a few months than any fault of the rules. Overall another very enjoyable game.
Posted by Just John at 12:33 2 comments:

Professor Baker Vs the RSVP's

An old gaming friend of mine visited recently and decided he wanted to give Pulp Alley a go. Now despite there being little evidence on the blog so far its fair to say that Pulp Alley consumed most of my painting and gaming time in the last few months of 2014 and it doesn't look like that's going to change anytime soon.

As this was his first game we went with the introductory scenario from the main rule book - Smash & Grab. Set up is very simple with the main plot point in the center of the table and the other 4 placed by the players.

The plot was quite simple. David, an evil genius was attempting to gain control of the final piece needed for his Infernal Machine. Together with his sidekick Moffat and 5 of his dastardly creations, Robotic Servitors & Vehicular Prototypes (RSVP1 -5), they attempted to reach it in an abandoned research complex somewhere in the Welsh countryside before his old arch nemesis Prof Baker.

Attempting to put a halt to David's nefarious schemes were Professor Baker and his erstwhile, if somewhat alcoholic sidekick, The Colonel. These were supported by some of the British Empire Special Task Force (BEST[f]) troops. As is immediately apparent the forces of good need some work on their acronyms. These brave troopers were Sgt Hedges, Cpl's Fred and Bill and Pvt's Tom, Dick and Harry.

The first turn began with both sides simply moving towards the center of the board or the nearest plot point.

Characters began to reach the plot points during turn 2. Both major characters passed their challenges with ease but Moffat failed the initial peril and received a wound. This actually had serious ramifications at the end of the game as he failed each subsequent recovery roll.

Turn 2 saw the start of the action. First blood went to BEST[f] as Cpl Fred took out RSVP-3. This as soon followed by the destruction of RSVP-4. Things were not looking good for David at this point.


Turn 3 saw two of BEST[f]'s troopers fall to accurate fire from RSVP-1 and RSVP-2, the latter of whom was to become a real thorn in their side for the remainder of the game.
Turn 4 saw the 2 sides began to close in on the major plot point. RSVP-2 took out the Colonel. Neither sidekick really got into the game which was a bit unusual bu just added to the narrative.

Things really began to heat up around the plot point. By this time the Prof was just removing the vital component from the device.

There ended yet another very enjoyable game of Pulp Alley. That's the 6th or 7th game I've played and its still great fun despite the fact that most of the games have involved introducing a new player to the rules. I'm looking forward to the next few games now that we more or less know the rules and hopefully we'll be starting a Perilous Island campaign in the not too distant future.