Nothing for two weeks and now two posts in two days. Well, having finished the Nissen huts, I decided to make some security fences to create a compound. After spending a bit of time browsing the internet looking for ideas I decided to use a combination of various tutorials. This is what the finished fence looks like 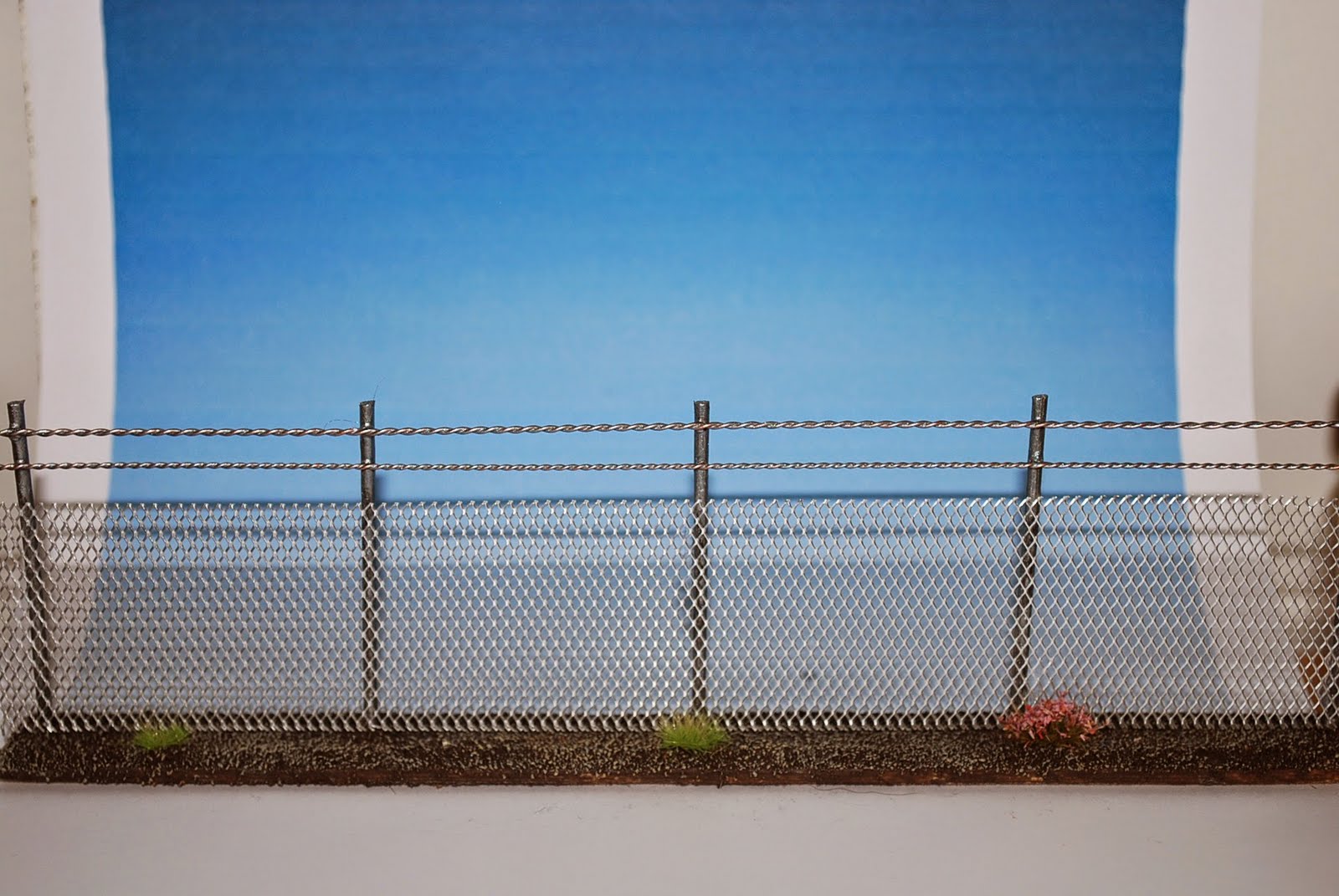 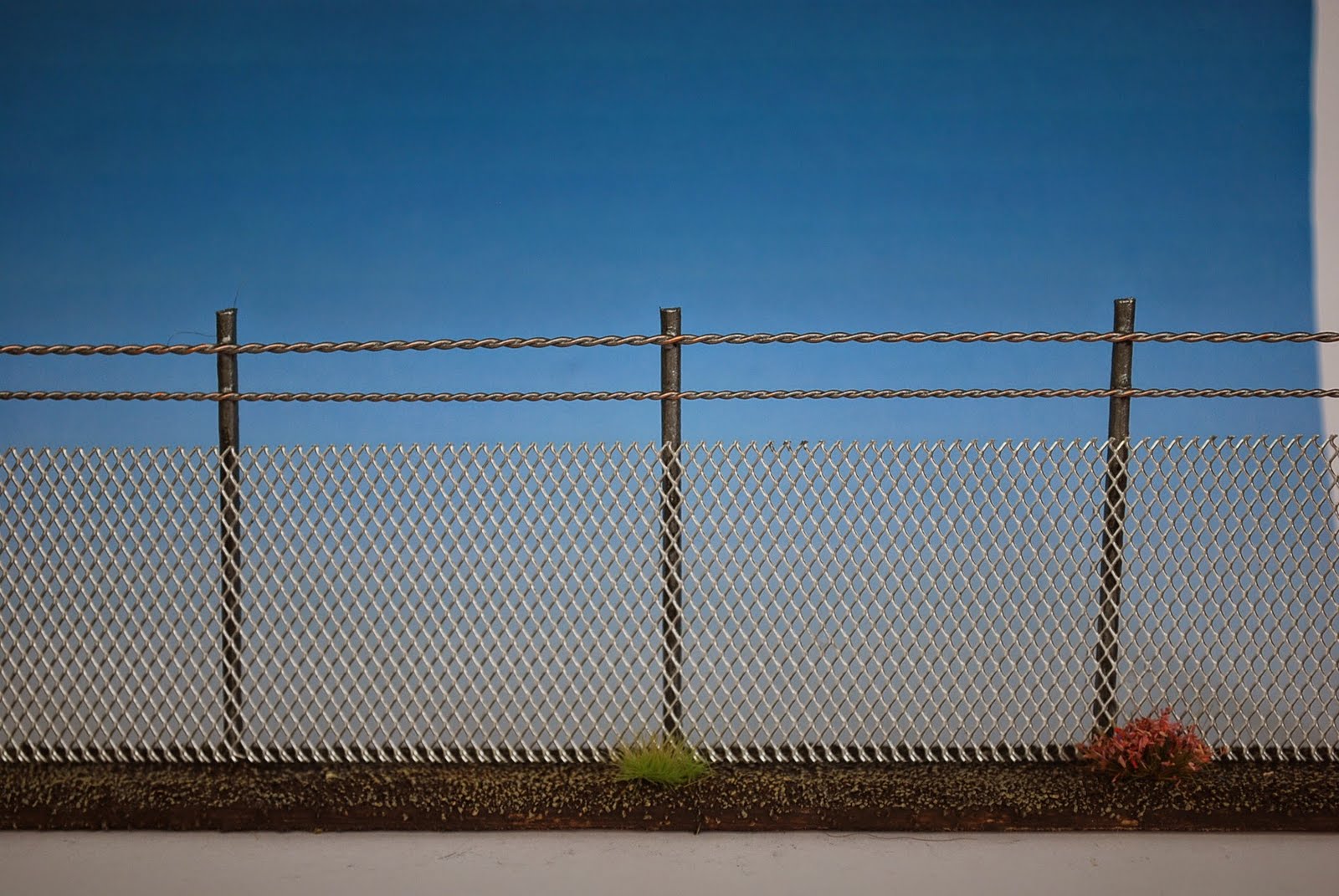 The materials needed to make these are: 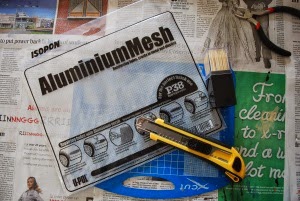 First stage was deciding the size of the fences. The sheet of mesh was about 200mm long and could be cut into seven strips each 23mm high so I decided to go with that. The mesh is actually soft enough to cut with a sharp knife, using a steel ruler to keep the cut straight.

Next I cut the MDF into 200mm long strips each 25mm wide. I chamfered the edges and drilled holes for the toothpick posts before gluing them in place making sure to keep them as straight as possible. I should note that I had cut the points off one end of the toothpicks and glued this end into the holes. 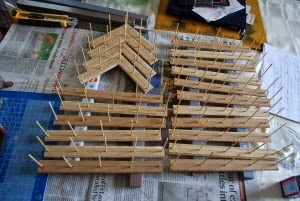 At this stage I decided to texture the bases to protect the wire mesh from paint, a decision I later regretted somewhat but I'll talk about the changes I would make if I were to do this again at the end of the post. I painted the MDF brown (Fleetwood Bitter Chocolate) and then added PVA and sand. When that was dry I painted two more coats of brown and then dryrushed with a cream (Fleetwood Bracken) 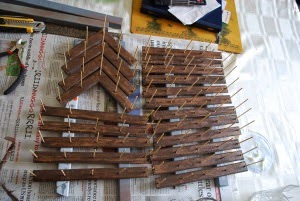 Next stage was painting the toothpicks silver. I used a cheap acrylic silver paint and it was shite, took about 3 coats to even begin to take hold. Eventually I used an old pot of silver from my model making days (Humbrol 56) and that did the job. Then it was time to glue the wire mesh to the posts. This was actually quite difficult as the mesh kept springing away from the posts before the super glue dried. Then I remembered that I had bought a bottle of Army Painter super glue activator. This stuff is magical. Put the glue on the post, attach the mesh, spray and it sets in a second. Its well worth getting for this sort of job. 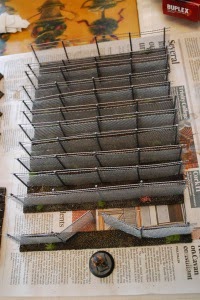 The next stage was adding the barbed wire to the top of the posts. I could have bought some but decided to have a go at making my own. I got two lengths of wire (0.2mm diameter, its actually the wire used to connect doorbells) and inserted the ends into the chuck of an electric screwdriver while holding the other ends in a vice. Switch on the drill and watch the two wires coil around each other. I made a piece about 2m long the first time but when I went to glue it in place it kept coiling on me and it was more trouble that it was worth. undeterred I tried it again, this time making 220mm lengths. These lengths stayed rigid once made and were ideal for adding to the posts as shown below. There is a roughly 5mm gap between each strand and the wire. The wire was then painted using silver (Humbrol 56) but I wasn't too bothered it being perfect, the little bits of copper that show through add to the texture of it. 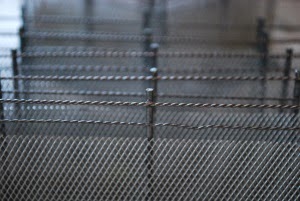 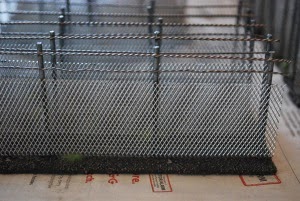 The final stage was clipping the posts to the right height. I had decide to leave this until the end as I wasn't sure what the finished height would be until this point. If I was doing it again I would shorten them earlier in the process as the forces applied to the toothpick caused some of the wires to spring loose. I didn't measure the posts, rather I just clipped them at what looked like the same height, I figured it made them look more realistic as it is rare to have these things perfect in reality.

The final piece was the gates. This piece was done much the same as the others except I left a loop in the upper strands of barbed wire to act as a hinge for the gates. The lower hinge is a piece of plastic from a cotton bud. The gates are made from steel wire bent into shape and glued to the mesh. This whole process was a right pain in the arse as I was too impatient between each stage and it was awkward making the gates to fit the gap. I probably would do this differently if I do it again. 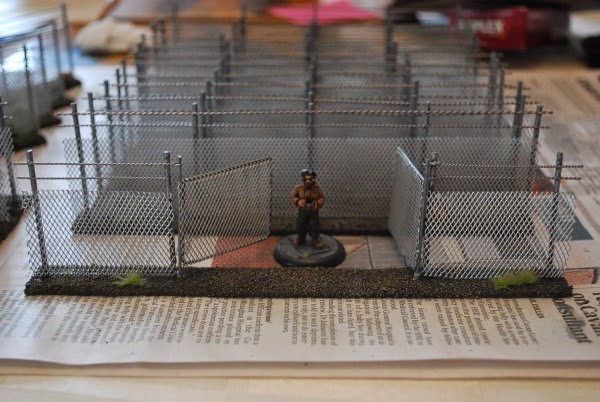 That's it then. Grass tufts were added at random along the base of the wire and any pieces that had come loose were glued in place again. That left me with 21 pieces of fence including 4 corner pieces and the gate piece. I will probably make some more in a few weeks, some damaged pieces of fence and maybe another gate. Total cost was €8.40 for 3 sheets of the mesh and €0.59 for the toothpicks so €9 more or less. Everything else was lying around. 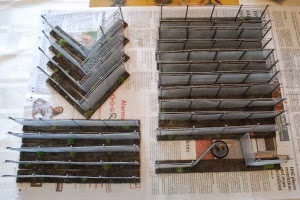 
I'm not 100% sure that the above revised method would work better but I would give it a try anyway.

I've had the huts finished for more than a week now but just never got around to posting the final part of the tutorial until now. Unfortunately I forgot to take photos as I went so I just have ones of the finished huts.

The next stage was painting and basing. I cut some rectangles of 3mm MDF, about 5mm wider than the huts on each side and glued the huts in place. I primed the edges of the MDF with some PVA to stop it warping. I'm not really sure if this was necessary but they haven't warped yet so it doesn't do any harm. Then I sprayed the entire thing with a few coats of a dark silver I got from Halfords. Once that was dry I coated the base with PVA and sprinkled sand over it. When the glue was dry I gave it a couple of coats of Fleetwood Bitter Chocolate and drybrushed it with Fleetwood Bracken.

I wasn't really sure how much weathering to apply, or how to do it. After a bit of thinking I just decided to use the newish GW paint Ryza Rust. I brushed it on at first and didn't like it at all as it was very orange looking. I wiped that off and started again by stippling it on randomly using a cut down brush. These were still a bit orange so I added water to some of the stippled areas and turned it into a wash of sorts. This was much more pleasing to the eye so I just went with it. I added rust mainly to areas that I figure water would settle, so at the base of the huts and in the grooves of the corrugated sheets. Then I applied a few washes of watered down black ink mixed with Future floor polish and another of watered down blue ink.

I painted the doors using a grey enamel paint (Humbrol 126) and added doorhandles using pins from my wife's sewing kit, which reminds me I need to go shopping tomorrow. Once the paint was dry I varnished them using the floor polish again and added some clumps of static grass. All in all I'm quite happy with how they turned out.


The only problem with this build was the restricted height due to the diameter of the Pringle tubes. I still had 3 half tubes left over so I decided to have a go at making taller huts. I followed the previous build up to the point where I added the corrugated card. I found some 25mm thick polystyrene sheets and cut them to the same size as the base of the hut and glued them together using wood glue. Once this was dry I more or less followed the same method as before and ended up with these.

As you can see I added small windows to the front of the huts. I prepared the front as before but cut out an additional hole for the window. I glued a piece of card in place and painted it black with an 'L' of light blue in the bottom corner. Here's a comparison of both versions of the huts from the front

and from the back


All in all though I'm quite happy with the results. I have 10 Nissen huts for any sci-fi games I play and they cost me €10 for the spray paint, €1.50 for the card and everything else was lying around. Oh and 5 tubes of pringles and I don't know how much coffee :-) By the end of it I was making them quite quickly and it is definitely worth making them in batches.