Another Oldhammer Challenge over another unit painted, although I might add another Black Orc to it at a later date. This time its Eeza Ugezod's Mother Crushers (RR18) one of the first wave of Regiments of Renown released in 1985 I think. No Regiment specific boxes in those days but this is the sketch published with the fluff article in the Autumn 1985 Citadel Journal. 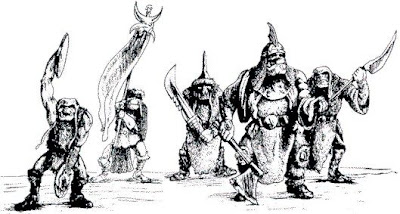 Canny followers of this blog will realise that these boys were undercoated back in 2012 and yes it has taken that long to finish them. Here they are then in glorious technicolour. The photos aren't great so I may replace them in the future.


(The following fluff is from the Autumn Journal 1985)
Of all the Orcish raiders to have plundered the Old World from the World's Edge Mountains, none have been so feared, or so hated as the Great Black Orcs of the Mother Crusher tribe. Their Great Raids of Hunger continued almost completely unchecked for nearly forty two years, leaving in their wake a trail of butchery seldom equaled In Orcish history.

Despite many efforts to capture and destroy them, the Mother Crushers always managed to avoid traps set for them. On the few occasions they were brought to battle the outcome invariably favoured the Orcs - using their famous juggernaut columns to push aside any resistance.

Their success was due mainly to the inspired leadership of one Orc. Known throughout the tribes as Eeza Ugezod, Orcish legend abounds with stories of this huge and cunning Orc. One such story, typical of the time, concerns the skirmish an the Great Crossing -a huge, natural span bridging one of the few routes through the mountains to the fertile foothills and valleys of the Old World. It was upon this bridge that a group of Orcs led by Eeza Uqezod were attacked by large numbers of Dwarfs and at least one mountain Giant. An extract from the Orcish 'Volees Adgitz' translates as follows.

'We goes miles this day. Last dark we kills many wittering souls, poking and cutting them - but not having times to make it slow and get them good and screechy. We gets on the Great Crossing and suddenly all around there'. Stunty Long Beards (Dwarfs) -trapping us boys and making pain threats. Then they goes all grinning silent, and crashing through the crowd comes a Great One, all drunk up, with great iron boots sparking as it steps, and long spikes and jags hanging off them, all dressed up for Orc stomping. It comes roaring and swaying towards us, swinging its club and making us boys windy and tearful. And the stunties are laughing, saying at last they'll have our pretty fangs to make their stunty women grin and dance. And us bold boys - we bunch up close, but cannot help a little wimpering. But Eeza Ugezod's got no wimper. He waves his axe and swears he's going to cut Great One's feet off and pop them in its face. With this he goes off fast forward and sharp hacks the Great One. Its knees goes one way, its great screaming whiskers goes another. The stunties has one look and go all quiet and shuffly. Then Guted - our champion - he gives an honest war shout and we goes off at them cutting up their little bodies, this way and that, and we collects much headskin with hair on it and ties it to our belts. We paints their juices all over the Great Crossing and we calls it the Red Span. We push all the stunties off it, but keeping a few for screarnings later and food for the march. We leaves not too many boys deadstiff and continues our way to make our dearest war and raidings.'

No one is quite sure what happened to Eeza Ugezod - he certainly wasn't amongst the hundreds of Black Orc dead after their supernatural defeat at the hands of the Necromantic Chaos Lord Edis Edis ......

BATTLE CRY The Giant Black Orc battle cry can only be termed as an incomprehensible cacophany of abuse and threat. Each individual does his best to outshout his neighbour. However, against Dwarvern foes they would chorus over and over again the blood curdling battle cry... 'Stomp the stunties - stomp the stunties - stunty stompings fun!'

BATTLE TACTICS On those rare occasions when tribal animosity does not prevail Black Orc tactics are crudely effective. Always consisting of huge columns (juggernauts) led by the best fighters and flanked by archers and wolf riders. Should there be any of the deadly multi-scythed wolf chariots, or mercenary ogres, these would be placed well to the fare. Although cumbersome and easy prey to artillery and magic, these huge formations were well able to plough through and scatter any but the stoutest enemy formations.

SPECIAL RULES Because Black Orcs naturally victimise smaller Goblins and Orcs (occasionally eating them) they are subject to Animosity at +1 on the dice.

I went to the local boardgame convention at the weekend and spent the day playing various games some old and some new. I helped organise a game of X-Wing in the morning where we had 12 Imperial blast 8 Rebel scum out of the sky.

Took a break for a while and wandered around the trade stands and chatted to people. Bought myself these 2 old gems from the bring and buy. I've never played them but couldn't resist them. 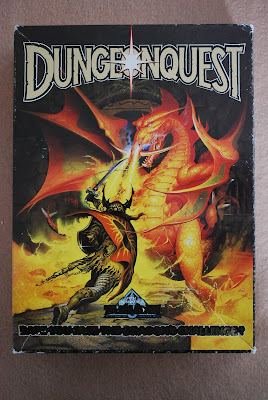 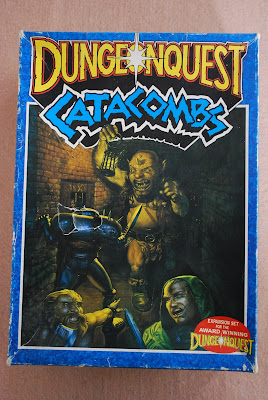 No of course I have to track down the 12 metal figures that came with the Heroes for Dragonquest box set. The trials of being OCD. I also got my hands on a bunch of movement trays that Wee Gamers were selling off quite cheaply. got this lot for just over a tenner. 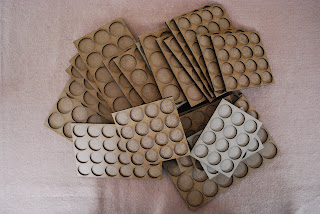 Also played a game of Block Mania, I had never played it before and will never play a 5 player game again as long as I live. As a wise 11 year old commented that was 4 hours of my life I will never get back again. I'm sure a 3 player game would be a lot of fun but 5 was too many.

Rounded off the day with a great game of Spartacus and a few card games whose names I can't remember. All in all a great day and I can't wait till the next one.

The first unit that I painted up are Harboth's Orc Archers, one of the second wave of Regiments of Renown first released in 1986 I think. This is what the finished unit looks like. Now I know I haven't finished their shields but I need to come up with a design, or a couple of designs, that will unify the army that I'm building. 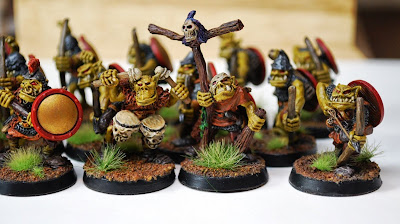 Heres how they looked back in the day and with the text from the back of the box below. 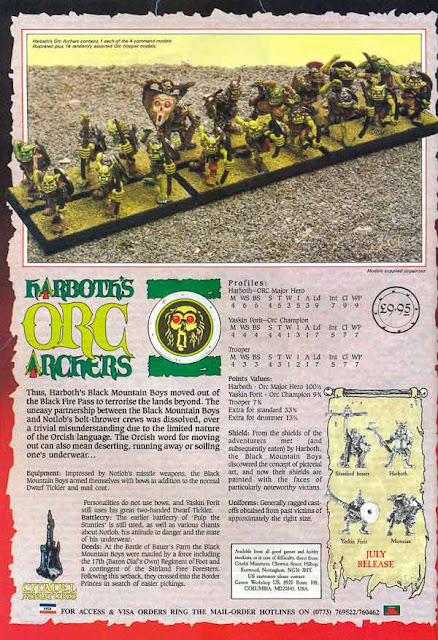 ...And so it was that Harboth’s Black Mountain Boys moved out of the Black Fire Pass to terrorise the lands beyond. The uneasy partnership between the Black Mountain Boys and Notlob’s bolt-thrower crews was dissolved, over a trivial misunderstanding due to the limited nature of the Orcish language. The Orcish Word for moving out can also mean deserting, running away or soiling one’s underwear...

Well at the start of June I mentioned over on the Oldhammer Forum that I hadn't painted a figure in months and had ignored this blog as well (despite which I have noticed an increase in my followers - welcome all and hopefully you shall be rewarded with some posts in the future). I decided then and there that I was going to change that so I started the almost monthly painting challenges which, even if I do say so myself, have been a great success so far (even if some people seem to have a problem understanding that June and July are long gone). That leaves the blogging part. Now that I'm painting again I reckon its time to start building an army or two out of all the lead and that is what I going to attempt to record here.

There will be two parts to this. Firstly will be my Orcs & Goblins which I will just keep adding to as units get painted or at least land on the painting table. This will probably be quite open ended as its going to be a large army. The second part will be the other armies that I am building. Inspired by a recent Oldhammer post by Norse and rereading the 1st edition supplement The Book of Battalions I've decided to start organising these smaller armies in Battalions of roughly 1000pts and more importantly painting them as a break from the Goblinoid Hordes. I think the first one of these that I do will be Halflings & Gnomes. 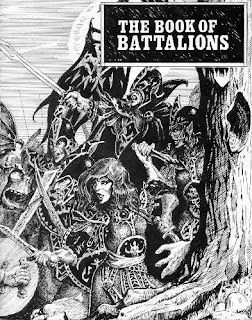 That just leaves the question of which Warhammer Rules I will be using. Despite the fact that Oldhammer is securely rooted in 3rd edition I started with 2nd and I still have my original box set so that is what I am going to go with. It shouldn't be too difficult to convert the points to 3rd edition if necessary but lets face it the chances of me finding another player locally are fairly slim so I can do what I want! Anyway it allows me to post a picture of Ravening Hordes, which is probably my favourite Warhammer cover, so I'm happy. 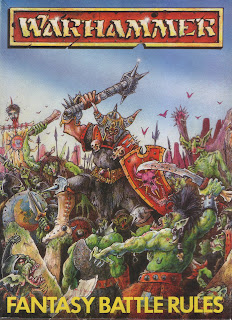 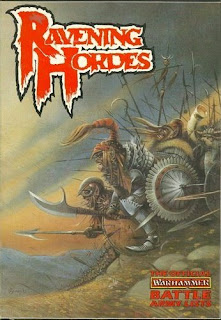 My next post should be the first few of the units that I have painted for the Challenges. Till next time.
Posted by Just John at 12:37 3 comments: