These were always one of my favourite of the original Regiments of Renown but as I never saw them in the old Diceman, the only gaming shop in my home town of Dublin when I was a kid, I never got to own any of them. Well now I'm happy to report that I have a full regiment of these wonderful Nick Lund figures. To celebrate this momentous occasion I have placed them first and foremost on the workbench.

So far all I've done is clean them up, undercoat and pre-shade them and prepare the bases but I thought I'd show the progress so far anyway. This way if I slow down I can be publicly harassed until I finish them.

Next up is Ognir his percussionist and another bunch of troopers 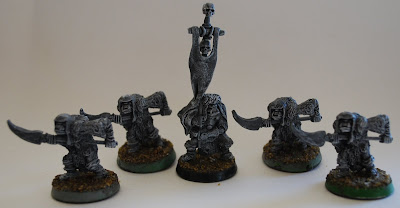 And finally the Champion and the last of the troopers

I'm going to go back to the original colour scheme for these guys and give them a dark brown or greenish brown skin tone - they are Black Orcs after all. If I can I'm going to give them a more 'realistic' look using mainly natural colours for the furs and leathers. Hopefully it'll all work out somewhat like the image in my head.

I have more plans for these guys. As is obvious from the photo the standard bearer is not entirely genuine, the first one I got my hands on was broken so I sculpted my own flag pole and flag from green stuff. I was going to replace him when I got the proper one (thanks Thantsants) but I kinda like him so I've decided to gradually collect a few more of the troopers and have a large enough force to field wither two regular sized regiments or one huge Juggernaut.
Posted by Just John at 04:12 1 comment:

Where Are They Now? Men-fish

Having mentioned these in the last post I realised I had never heard of them before, nor seen the miniatures. According to Warhammer 1st edition they are a 'strange synthesis of man and fish, humanoid but scaled and capable of living underwater as well as on land.' They are equally at home in the sea or fresh water and mount night raids on the fishing villages of any of the other races whether human, elf or goblin. (No I didn't know goblins could fish either)


According to the rules the figures were available as C22/3 but the only ones I could find were released as in the Fiend Factory as FF65-2 Ferocious Man-Fish (various) in December 1982. Not the greatest figure ever and not really that ferocious if you ask me.

That's about as it good as it got for the poor old FM-F. They had vanished from the Warhammer world by the time 2nd edition rolled around never to be seen again. I guess with a stat line like the one above they just couldn't survive or maybe global warming caused had a sever affect on their habitat - who knows? Now I'm off to e-bay to see if I can find any.
Posted by Just John at 19:55 3 comments:

Email ThisBlogThis!Share to TwitterShare to FacebookShare to Pinterest
Labels: Where Are They Now
Location: R512, Co. Limerick, Ireland

One thing I like in a set of wargaming rules is the inclusion of some element of randomness that takes the certainty out of a players turn - whether this is diced movement as in the Lardies games or the Blunder! roll in Black Powder. Browsing through the Fighting Fantasy Battles volume of the old 1st edition Forces of Fantasy supplement for Warhammer I found the following optional rule that dealt with terrain and hidden monsters.

The idea was that whenever troops entered a piece of terrain for the 1st time in a game they ran the risk of encountering hidden monsters. A percentile roll was made on the following table and the resulting monster placed on the table presumably under the control of the GM although in the absence of one I'm sure it could be controlled by the opposing player. This roll was only made on the first occasion that troops entered the terrain. 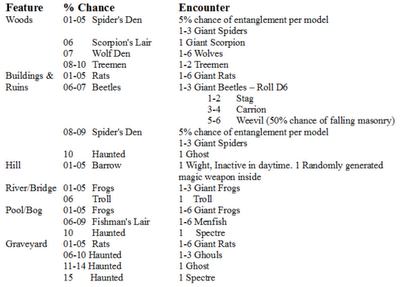 I think it would certainly add a bit of fun to certain games, perhaps not scenarios but certainly encounter type battles. The table could easily be modified to whatever random giant animals/ monsters are in your collection.