The Battle for Standard Falls.

Cheetor invited a group of us down to his place for a weekend of gaming down at his place. Amongst the games we played were the new Assassinorum: Execution Force from GW, Season 3 of Zombicide and Pulp Alley. Execution Force was a bit of fun but let down somewhat by being a bit too easy and only having one scenario in the game. This was also my first game of the latest Zombicide and we played a couple of the beginning scenarios. Again they were a bit too easy - the special abilities that the survivors have tipped the balance a bit too much in their favour. The main event was, as has become the norm when we all meet up, a couple of games of Pulp Alley.

I played Paul B with my Leprecians pitted against his home brew Purgators. His minis are all from Ramshackle and are very nice in the flesh so to speak. We played Hidalgo Fire, which is the first scenario in the Perilous Island campaign. We tweaked it a bit to suit our needs and so began the battle of Standard Falls. 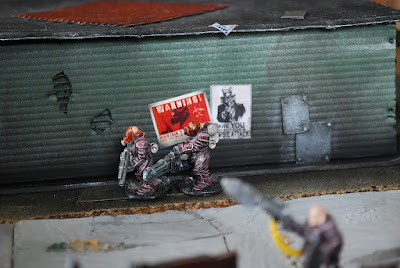 Turn 1
The action started quick and bloody over on my right with a Purgator and HR III shooting each other dead followed by Pig Iron, the Purgator sidekick, killing poor Orinoco, the space Womble. HR II takes out a Purgator sneaking up behind the bar and Cap'n Freeman and HR V exchange fire each taking a wound.

Turn 2
The Purgators began the second turn with a slight advantage have recovered a couple of wounds whereas the Leprecians had failed all recovery checks. Both sides were closing in on plot points so it was still evenly balanced. 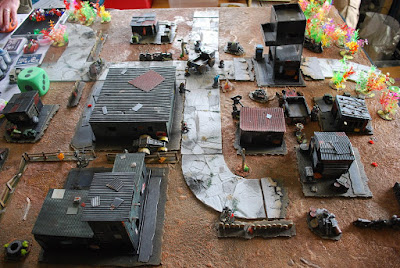 Turn 3
The previous turn had seen the advantage swing towards the Purgators. They now controlled Lasy Elaine (major plot point) and the Bodyguard (minor plot point) plus had troops on the remaining three minor ones. The Leprecians were finding it extremely difficult to do any damage - obviously whoever programmed the HR units had messed up their firing and defense protocols. 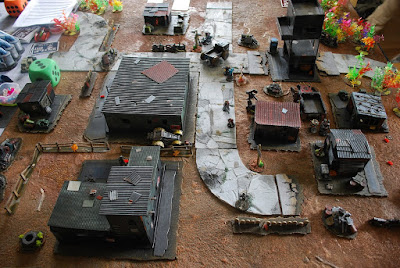 Turn 4
The previous turn saw a slight improvement from the Leprecians but then all hell broke loose and explosions rocked the town of Standard Falls.

The game was going to hinge on a couple of things in Turn 5. Could Jameson and HR V get to the available plot points and knock Bull down? It was going to be tight with no room for errors. 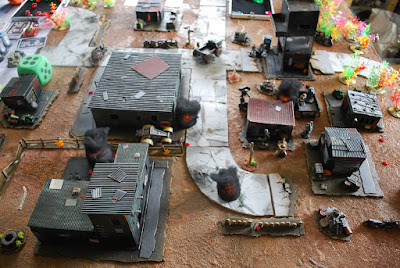 We decided to call the game at that point - there was no way the Leprecians could even claim a draw. A furious, yet humbled and slightly embarrassed Captain Jameson slunk away vowing revenge on the Purgators for interfering with his plans.

Even though its often a few months between games and we are always rules rusty it only takes a turn or two of Pulp Alley to get back into the swing of things. As ever another fun game. We played a 4 player game later that evening - I'll post another report of that when I get a chance.
Posted by Just John at 05:29 6 comments:

Jameson vs The Necrons

Furstenburg called over a few weeks ago for another game of Pulp Alley. For a change there were only two of us playing and there were no new players so it was a bit different and just as enjoyable as ever.

I gave my Leprecians led by the irrepressible Captain Jameson another outing, this time against a horde of Necrons (we used the Gang rules from Pulp Alley's recent release Vice Alley)

The scenario we played was Deathtrap from the main rule book and saw Jameson separated from the rest of his league. He started in one corner with the entire Necron league between him and his troops. They had to rescue him before the end of the 6th turn.


With the forces so far apart it was inevitable that the action would centre on Jameson. If the Necrons could knock him down then they could claim him in the same manner as a plot point. In this game he then counted as the Major plot point and was worth 3VP's. Round 1 of combat ended with wounds all round and 1 dead scarab horde.


The first gang of Necrons advance across the open ground and lost 2 of their number. Not that it bothered the infernal robotic menaces.

Unfortunately a long range shot took out one of the Leprecians. Normally this isn't the sort of thing tat would bother Jameson but hey this timits his skin on the line.

The Necron gangs weren't quite as tough as they looked at first.  Shorty had the initiative and made short work of the first gang.

Elsewhere the fight involving Jameson continued but no one gained an advantage, although Jameson failed his recovery roll which wasn't part of the plan. Perhaps a bead of sweat could be glimpsed upon his brow. 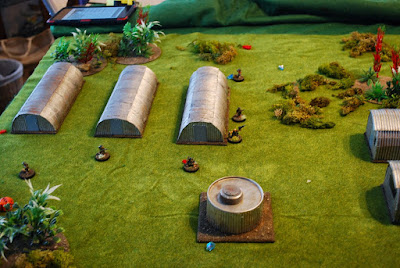 At the start of turn 4 things are looking relatively OK for Jameson, his forces are advancing and he's holding out against the Necron leader & sidekick.

But then disaster strikes - he stumbles over a rock and the Necron lord, cad that he his, takes advantage and sucker punches Jameson. He falls to the ground and shock waves reverberate through the universe. A smile breaks out on the Black Majors face, Zardork feels a warm tingling sensation, a psychotic armed rodent feels a sense of relief.

At the start of this turn Shorty takes command and makes a tactical decision. Rescuing the boss would be nigh in impossible and he doesn't feel like dying today. He makes for the thrid plot point which would make the game a draw. (Orinoco had two by this point) Orinoco was just an ally but I decided to give him problem solving stats to gain plot points rather that the usual shooting or dodge, and it worked out quite well.


At this stage Shorty is at the 3rd plot point and successfully resolves it, drawing the game. However, I had the fortun card that allowed me to extend the game by one turn. Orinoco could reach the last plot point and attempt to resolve it next turn. If he succeeded and managed not to loose any plot points I could win on a technicality. Jameson would be proud of him, he thought to himself.

Its decided and I play the card. Orinoco moves to the 4th plot point and its winner takes all in the last round.

The final turn begins with a mad dash to defend/kill Orinoco at the final plot point. First off the gamble pays off and Orinoco passes the test. The Leprecians are winning! Ok technically Jameson is still a prisoner but its not as if he;d rescue any of them is it?


I want to say the Leprecians snatched victory at the death but I have a feeling it ended as a draw. Orinoco had 3 plot points but Shorty dropped his when he was knocked down. So the game ended with 3VP's each

In case you're wondering this chap was the only other survivor. He was involved in a rather funny fight between a bunch of Followers. He lived, the others died.
Somehow I doubt this is the last we shall see of Jameson. Perhaps this is all part of his nefarious plans. He's too good a villain to not see again.

As usual another great game and we played through in just over 2 hours. Perfect for fitting a game in around busy lives.
Posted by Just John at 08:24 4 comments: